You’ve probably heard the terms 1080i and 1080p when referring to video. But what does it mean? Many people think they are interchangeable, but often times there is a significant difference depending how it is used. There are some differences, as well as similarities, and each has some positives and negatives.

To start, the i and p refer to the type of scan done to get the picture, and stands for interlaced and progressive, respectively. Both of these refer to the 1080 horizontal lines on a screen when you have a 16:9 ratio, creating a 1920 x 10080 resolution. Progressive scanning means that each line is scanned sequentially and the full image is scanned for every frame. Interlaced scanning means that odd and even lines are shown in alternating order, so half of the image is shown each frame, and the other half is shown in the next frame. Because our naked eye can’t notice the change that quickly, you likely won’t notice the change on a standard TV. 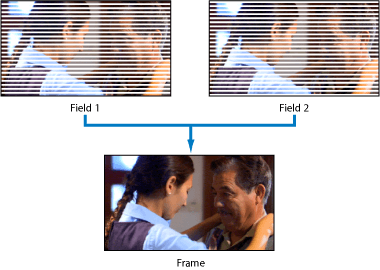 Shows how 1080i uses alternating lines to create one image

Negatives of 1080i
With 1080i, there are some problems you may face, unless you have some workarounds or lose some picture quality. 1080i resolution doesn’t allow you to easily:

Video encoding is also more difficult because there is never a full frame with the whole picture in high quality. 1080p doesn’t really run into these problems, but there are still some issues with 1080p. This mostly involves the fact that there are typically fewer frames per second because there is a full picture every time rather than half of the image every other time. Some equipment and broadcasts don’t work with 1080p, but this has changed over time. 1080i is seen as using older technology and is typically not as desirable if you can help it.

It all depends on how the video is being used and what other gear or sources you are working with. Generally, 1080p is preferred when possible. We have yet to talk about the differences between standard definition and HD, or other resolutions such as 720p and others. But we will cover this in another blog. You can also check out these other articles talking about the similarities and differences between 1080p, 1080i, and others: