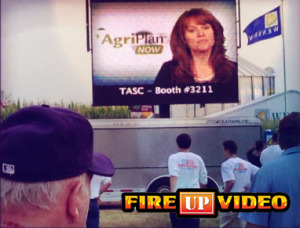 La Crosse is an great city in Wisconsin, just on the other side of the Minnesota border. It is the largest city on the Wisconsin’s Western border, with an estimated 51,647 residents, and 135,298 residents in the larger metropolitan area.

The city attracts more than 1 million visitors every year. La Crosse is host of several universities, including the University of Wisconsin-La Crosse. It is also home to a number of semi-professional and college sports teams, such as the La Crosse Loggers, Coulee Region Chill, and more. The La Crosse Fairgrounds Speedway in West Salem is the only paved NASCAR asphalt stock car racing track in Wisconsin.

With as many events as there are in La Crosse, event planners and promoters need a way to separate from the rest. That’s where Fire Up Video comes in. Our fleet of four mobile Jumbotron screens for outdoor events can bring any event to the next level. We have brought our LED video walls to just about any type of event you can think of, and guests always love it! We can play live video of the event, promo videos, sponsor loops, slideshows, social media streams, event announcements, or anything else you could come up. Whatever you want to display to your audience, the mobile video boardis the way to do it.

If you are planning you next event in La Crosse, WI, we would love to discuss how we can make your event bigger and better than it already is. We service all over the upper Midwest, including other cities such as Rochester, MN, Davenport, IA, Rapid City, SD, Stevens Point, WI, Peoria, IL, Lincoln, NE, Kansis City, MI, Minot, ND, Columbus, OH, Lansing, MI, Nashville, TN, Fort Wayne, IN, St. Louis, MO, Denver, CO, Sioux Falls, SD, Lawrence, KS, and everywhere else in between. Contact us to secure a screen for your event at 844-533-8848 or baum3@earthlink.net.